Destroyer worth $4.4 Billion has been dubbed a “Failed Ship Concept” 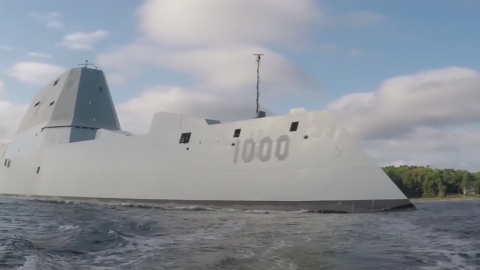 After spending $10 billion on research, one Zumwalt could cost up to $4.5 billion to produce. The Navy’s insistence to include newer technologies while under development caused the Zumwalt’s price to skyrocket.

Even when construction began in 2009, the final design of the ship was still not finished. To save $80 million, they opted to modify their SPY-3 radar instead of combining it with the SPY-4. Meanwhile, the ship’s longer-ranged missiles could only be used with the AEGIS combat system which it did not have. To make things worse, the 57-mm guns were replaced with 30-mm chain guns.

It also only had 80 cells to carry land-attack missiles. For comparison, the Arleigh-Burke Destroyers had 96, Ticonderoga Cruisers had 122, and Ohio-Class Submarines had 144 – all of which were way cheaper than the Zumwalt.