Don’t Trespass The Tomb of the Unknown Soldier 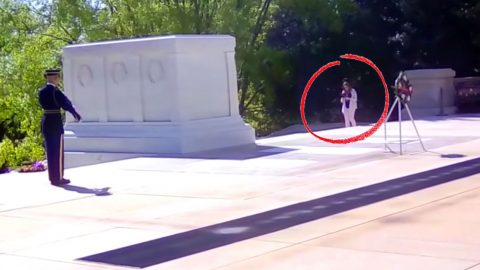 Watch The Full Video With Guard’s Reaction Below.

As most of you know, the Tomb of the Unknown Soldier is a sacred place. For all those who died for our country and were never found, we erected a monument that is watched 24/7, 365 days a year. The guards keep watch there during hurricanes, snowstorms and anything nature throws at them. In our opinion, this should be the most respected location in the United States.

Now, for the sake of argument, some people might not have the same military knowledge as we do so they don’t know the history of this place. Ok. We get that. However, there are barriers to keep people out of there as well as plaques everywhere telling them to be quiet and respectful.

Unfortunately, some folks don’t heed those warnings. From what we can gather, the woman in the video below wanted to take a closer picture with her tablet and chose to squeeze through a small gap between a post and a pillar meant to keep people out.

As per his training, the guard immediately told her to get back. Civilians are not allowed to walk through the monument under no circumstance which is something the woman in question learned within seconds of trespassing.

What do you think? Honest mistake or should she have known better?