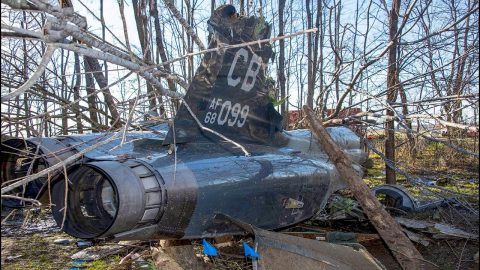 Lt. Scot Ames, a 24-year-old instructor, and Capt. Renshi Uesaki, a 25-year-old student pilot, both died from the crash. According to investigations, they both share the blame for this mishap.

During the final approach for landing, Lt. Ames lost situational awareness and failed to take timely actions. Meanwhile, Capt. Uesaki was apparently overwhelmed in air traffic and left the throttle idling for 18 seconds.

After Uesaki banked 40 degrees, the aircraft has already slowed down beyond recovery. Nevertheless, Ames still tried to regain control to level the wings and pitch up. Unfortunately, it was too late. The plane has slowed down to 155 knots and was already falling 1,100ft per minute.

Their plane flew through power lines and trees before hitting the ground. Both men died instantly from the impact.