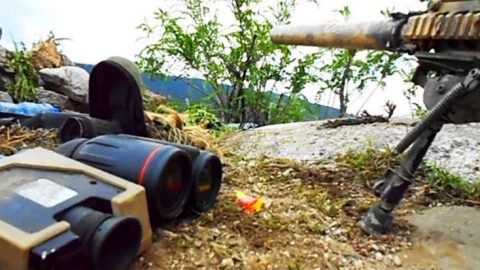 The popping sound of bullets fills the air as a well-trained sniper ducks behind rocks for cover. Bullet fire from Taliban gunmen suddenly turns to mortar blasts as hell continues to reign down. But US snipers are used to being under this kind of pressure and pulling through and this guy is no exception to the rule.

This entire conflict began as a sniper noticed a group of five Taliban fighters moving in the distance. The militants were armed with RPKs and AK-47s and the sniper made the call to attack them before they noticed. Things didn’t go as planned and the attack only enraged the Taliban fighters so their shots intensified.

“It all started when my sniper team saw 5 guys crest the ridgeline 1450m away, holding PKM’s, RPK’s and AK’s. We hit one of them and they were pissed off, so 5-6 PKM and RPG teams engaged us. We had about 20 line company guys with us with built up positions and THEY were the ones to get spotted.”

The battle is very back and forth with the whole thing escalating quickly. The footage of the combat can be seen in this short clip, be warned it does have graphic content.