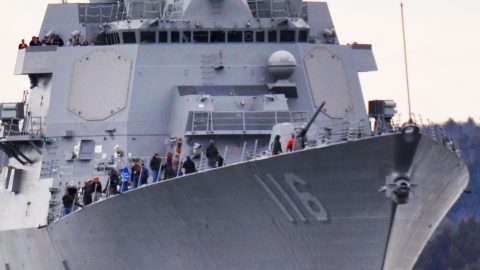 As the United States broadens its global military reach it needs to replace and expand its military equipment. As the Navy is getting older, its ships and onboard equipment are getting outdated and the only way to stay on the top is to have the latest technologies to combat the incredibly fast-paced arms race. For this reason, the Navy ordered 5 new Arleigh Burke-class destroyers one of which was just completed.

USS Thomas Hudner is an Arleigh Burke-class guided-missile destroyer. Ordered in 2012, Bath Iron Works in Maine worked on it for 5 years, launching and christening it in 2017. As of May 3rd, 2018, USS Hudner finished her acceptance trials and was accepted by the Navy on June 15th.

The ship’s primary roles in the Navy will be to conduct anti-aircraft, anti-submarine and anti-surface warfare as well as strike capabilities. Its 513-foot hull and over 9,000-ton displacement will allow it to reach speeds of up to 31 knots.

Thomas J. Hudner Jr.was born on August 31st, 1924 in Massachusetts. He joined the Naval Academy in his 20s and eventually became a naval aviator, reaching the rank of captain. During his service, he received a Medal of Honor for his heroism during the Korean War, an act that immortalized his name on this ship.

Flying the F4U Corsair on December 4th, 1950, Hudner’s wingman got hit with ground fire and crashed in the snowy mountains, his aircraft immediately catching fire. To try saving him, Hudner intentionally crash-landed his own aircraft in order to pull his wingman out but was too late. He also injured himself in the process and had to brave freezing temperatures until he was evacuated.

Below, we found footage of President Truman awarding Cpt. Hudner the Medal of Honor back in 1951.