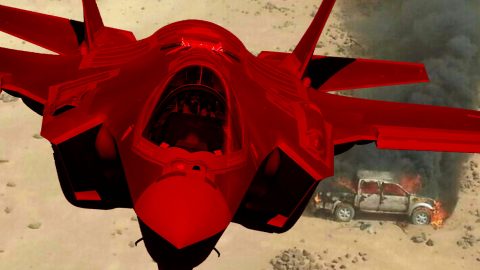 Late and overbudget, unnecessary and overcomplicated, are typically the words associated with the F-35 Lighting II. Although some of these adjectives might be true in one way or another, the fact of the matter is most people commenting have no background in anything other than just “liking military aircraft” and have no idea out the millions of complexities associated with developing a 5th generation fighter.

Sure, the helmets were feared to break fighters necks and some components caught fire over the years, but as with any new piece of equipment, there are always kinks to be ironed out. Now that most of them are, the Marine Corps is reporting the platform’s performance is beyond stellar.

“The F-35’s—twenty-four to zero kill ratio—killed all the targets…It was like Jurassic Park, watching a velociraptor—kills everything, does really well. We can’t get that airplane fast enough into the fleet.” –  Lt. Gen. Jon Davis, U.S. Marine Corps Deputy Commandant

To show its true capacity, the Marine Aviation Weapons and Tactics Squadron One in Yuma, Arizona ran the Lightning II through the Weapons And Tactics Instructor course. The goal of the program is to simulate the world’s most high tech surface-to-air defenses and see how aircraft fair against them.

Dojo said it best. All eyes are on @AirandSpaceShow for the @LukeAFB #F35 Demo Team’s North American debut! https://t.co/kxhsA5vjKv | via @Oriana0214 pic.twitter.com/FWfFTP1Dpw

Typically, squadrons of Harriers, Hornets and Prowlers would lose about half of their force penetrating such defenses when entering enemy territory. Because of the F-35s stealth technology, it not only kept its whole force but also shot 24 of their targets and remained hidden in the skies.

Not bad for an aircraft many “experts” deem a failure.