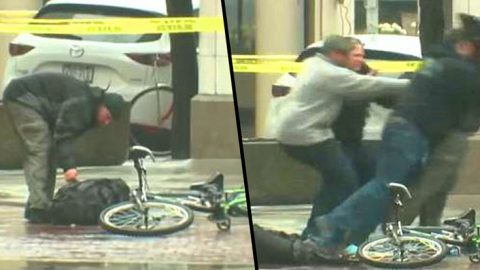 Recently a bag left outside of a Milwaukee restaurant raised suspicions and the police were alerted for fear of a bomb threat. The area surrounding the bag was cordoned off by police tape as bomb squads took their sweet time preparing to investigate. A concerned citizen felt that the bomb squads were taking too long and rushed into the situation but the police didn’t like that.

“He rode past me and he was saying, ‘I’m going to diffuse this situation’.”

A man on a bicycle quickly moved past the police and through their makeshift barrier to keep out the public. Then he proceeds to grab the backpack off the street and empty its contents out onto the street. He quickly proved that there was no bomb or any sort of threat from the backpack.

Some would call him a hero, but others were calling an ambulance because the police didn’t like his act of heroism. Seconds later a huge gang of policemen tackles the cyclist and wrestles him to the ground. The fate of the cyclist is still unknown but he will probably be nursing a few bruises rather than being hailed as a hero. You can see the video of the incident in this clip.