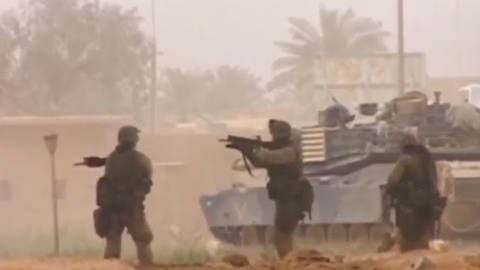 This was recorded during the US Invasion of Iraq in 2003. The video shows the India Company 3rd Battalion, 7th Marine Regiment assaulting an Iraqi Republican Guard compound near Baghdad. At the time, the US forces had not yet taken the capital of Iraq. According to the video description, the US Marines and soldiers “were being fed intel that they were under constant threat of chemical attack by Iraqi forces.”

The US invasion began in March 20, 2003, and it lasted for a little over a month. Combined forces from the United States, the United Kingdom, Australia and Poland participated in the invasion.