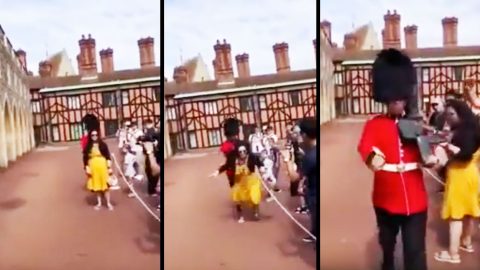 Here’s something you don’t see every day. An honor guard actually using force to get an unruly spectator out of his way, although we’re not sure how far our American guards can go.

We’ve seen plenty of videos of the Tomb of The Unknown Honor Guards using loud, stern voices to quiet down disrespectful spectators or make a sound with the butts of their rifles to get people back behind the railing. We’ve never seen what happens if that doesn’t work, however, as people always get whipped right back into shape.

The Queen’s Guard in the United Kingdom, however, patrols streets around royal residences. This means they use the same streets where others walk but from experience, we know that most folks just get out of the way.

Not the case here, however.

Although clearly marked off by a rope, a tourist hopped it and presumably wanted to take a picture (facepalm.) This did not stop the guard in his stride, however. He marched straight through her after giving her a nice little shove in the behind and she definitely got the point.