Gen. Mattis In This Show Delivers The Greatest Military Line Of All Time 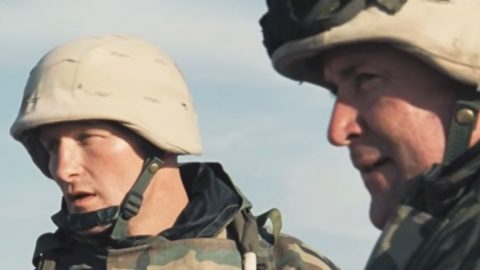 General James Norman Mattis has become a household name over the past years. A dedicated lifelong Marine, Mattis was recently picked to be the United States Secretary of Defence, making the name more known outside of the military circle.

Known as “Mad Dog” among other nicknames, Mattis is known for having an iron hand which just recently earned him the unofficial title of “Secretary of Offence.” This is clearly depicted in the popular show Generation Kill where he makes a 1-minute speech which sums up his character perfectly.

Born on September 8th, 1950, Mattis is a career Marine. Married only to the Corps, he enlisted in 1969 at the tender age of 19 and climbed the ranks since then. He served in the Persian Gulf War, Afghanistan and Iraq.

He not only fought physically but also stood his ground when faced with the military structure. He was known for removing underperforming senior leaders and getting the Corps back in shape, something that the clip below clearly displays.

The clip is from the show Generation Kill, an HBO original which aired in 2008. Hailed as one of the truest to life military shows, it followed the lives of the Marines of the 1st Reconnaissance Battalion in the early stages of the war in Iraq.

During one of the scenes, one of the leaders of the Batallion were not advancing fast enough to get to their objective and to their dismay, General Mattis arrived at their location. He had a few choice words for them to get their motivation going again. You can hear it below.