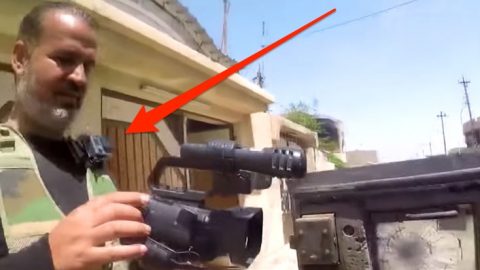 War is hell and is it never pretty but the world must suffer through these ordeals sometime for the sake of peace. Wars must be fought and more importantly, the world must know about them hence the importance of war journalists. However, journalists in war zones are in constant danger and often they have some pretty close calls with death.

Ammar al-Waeli is no stranger to war zones, though he is armed not with weapons but with his camera. He works as a journalist covering combat around the Middle East. While interviewing a colleague about their experiences al-Waeli took a bullet to the torso. Fortunately, he was only shaken up because the bullet actually hit the Go-Pro mounted to his shoulder.

“It’s a Daesh sniper, but thank God the bullet didn’t hit me. God’s benevolence and this camera saved my life.”

In that bullet would have been an inch to the left then Ammar could have counted his days over. You would think that he would be hesitant to get back in action but the very next day he returned to cover the fighting. Here is the film of his close call with death as the bullet hits him.