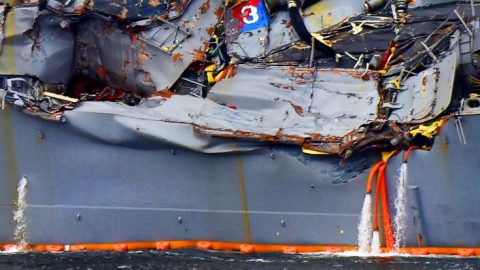 Last year the US Navy was shaken as the USS Fitzgerald collided with a massive cargo ship. Seven sailors lost their lives and an investigation revealed the incident was entirely preventable. Naturally, people wanted to know who was responsible for the fatal crash and how they should be held accountable, but there are some changes in the works and the public may not be happy.

Initially, Commander Bryce Benson and two Jr. Lieutenants were going to be charged with negligent homicide but the Navy changed their mind about that. The homicide charges against the officers have been dropped, however, the case will still proceed on the charges of “negligent hazarding a vessel and dereliction of duty resulting in death.”

“Fitzgerald had systemic problems with its equipment and training — to single this young woman, who has served honorably and with distinction, for prosecution is very troubling in the circumstance.”

The case is still progressing forward but this decision will no doubt draw criticism from those who believe they should be held responsible.

Where do you stand on this issue? Should the leadership be charged with homicide or is that too extreme considering these were accidents where multiple people made errors?