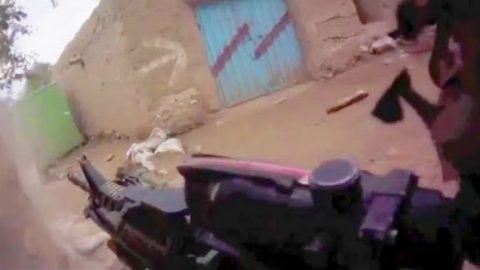 Firefights will always be an intense experience no matter how much training a soldier may have. There are no good shootouts, they simply range from bad to worse depending on the situation. Arguably, the worst position you can be in a shootout is separated from your group and pinned down by enemy fire as one soldier experienced.

The sound of popping bullets erupts through the air as our hero fights for his life. This soldier ducks behind a dirt wall as the dust clouds puff up from the bullets landing around him. He leaps up from behind the wall to shoot back at the terrorists but with little effect, he is alone and screaming for help. He is the only one who can help himself at this point.

Against all odds, the soldier in this film endures the onslaught against the terrorists. Separated from his squad he continues to fight back in an incredibly tense situation but miraculously he survives the traumatic ordeal. This video from the soldier’s bodycam shows just how dangerous the shootout was and what he had to deal with. Be warned there is some graphic language and graphic language so don’t watch this clip if you’re easily upset.