Helicopter Crash Filmed From Inside Cabin 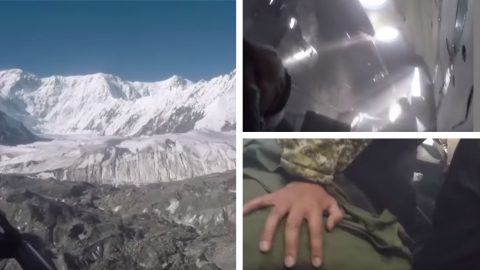 This helicopter footage appears to be taken from an incident shortly after a group of trapped tourists were rescued on the Khan Tengri mountain in Kygerstan.

On July 9, the Mi-8 attempted to land in area of the South Inyelcheck Glacier. The landing did not go well, causing injuries to the four crew members, nine tourists, guide, and medic.

It is unclear if the helicopter was in proper working order before the crash, but it’s not the first Mi-8 to have an incident in the treacherous but popular mountain area. The Kyrgyz Association of Tour Operators has expressed concern  over a shortage of suitable aircraft needed for high-altitude operations.

At first, all appears well as a man, likely one of the rescued hikers, films the passing of gorgeous snow-covered mountains. But as the helicopter attempts to land, there’s a huge jolt. The man, camera, and other occupants are jostled about the cabin as the Mi-8 rips open and daylight pours in through its belly.

Shocked, the helicopter’s occupants are disoriented and clumsy. The man with the camera, seemingly injured, pleas with other passengers to not step on him. He is then able to climb out of a gaping hole.

While the camera’s point of view (understandably) is often blocked, its clarity and detail when it does show the action,  feels surreal. The urgency in the voices also show just how harrowing of an experience this incident was. How scary!