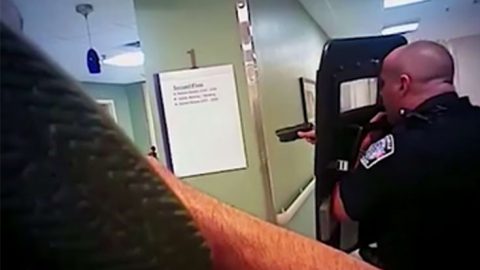 We like to think of hospitals as a place of peace and healing where patients can be at ease until they are good health. However, a hospital can also be a vulnerable place while patients are at their weakest and it only takes one bad person to make everything go wrong. A hospital in North Carolina experienced this scene when a patient pulled a gun and police were summoned to deter the situation.

76-year-old James Charles Cook at patient evacuated from Hurricane Irma pulled a gun out of a briefcase causing a major incident. Police were called to the scene at Novant Health Huntersville Medical Center to deter the gunman as he began brandishing his weapon through the hallways.

“For the safety and security of our patients, visitors, and team members, this evening Novant Health Huntersville Medical Center initiated a temporary security lockdown due to a police matter that took place outside of our facility.”

It was a hectic scene but the police knew what they were doing and how to handle an unruly gunman threating the lives of innocents. Bodycam footage from two police officers can be viewed in this link to show how they handled the vicious shootout.