How this Genius Invention Revolutionized Transport of Gas on Gigantic Ships 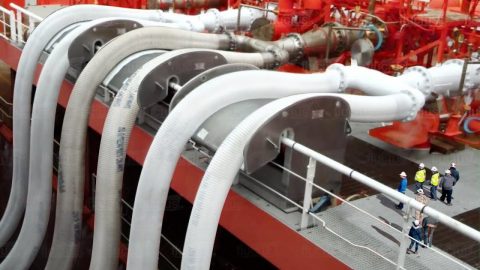 Gas may be cooled to become a liquid through condensation, making it easier and safer to store aboard vessels and be shipped overseas. Liquified Natural Gas has a cryogenic temperature of 162 degrees Celsius while only taking up about 1/600th of the volume of natural gas in the gaseous state.

The first commercial ship-to-ship transfer of an LNG was done in 2007 at the Flotta facility. There, 132,000m3 of LNG were passed between two vessels named Excalibur and Excelsior. Another test was done by a Belgian gas tanker owner in the Gulf of Mexico, transferring LNG from a conventional LNG carrier to an LNG regasification vessel.

There have also been tests regarding the use of LNGs in aircraft. For example, the Tupolev Tu-155 was tested on LNGs, but the low specific energy of the gas compared to conventional fuels gave it a distinct disadvantage for flight applications.