How This Legendary Pilot Destroyed The Bismarck In A Biplane 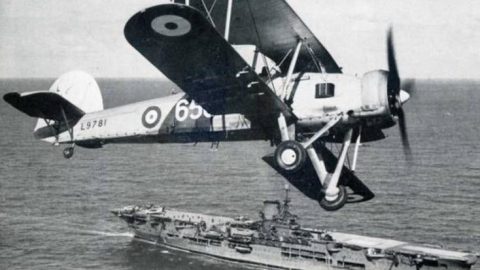 The Bismark was once the flagship of the German navy, but now it sits at the bottom of the ocean in a lonely grave. The seemingly indestructible battleship was destroyed thanks to Lieutenant Commander John “Jock” Moffat who took it down from a biplane. The legendary pilot who earned his place in history has passed away at age 97.

The Bismarck left a trail of destruction everywhere it went sinking the HMS Hood and attacking vital supply ships. The people of Great Britain were in a desperate situation and left with no alternative they had to destroy the Bismark.

“I don’t care how you do it. You must sink the Bismarck.”

The pride of the British people was wounded from the losses and they needed to strike a victory to save face. John Moffat set off with a group of 15 Fairey Swordfish torpedo-bombers to launch an attack on the massive battleship. Fortunately, Moffat’s Swordfish was able to evade bullets from the Bismark due to its agility and thin frame.

“The great thing about the Swordfish was that the bullets just went through it. It was only made of canvas. It was like David and Goliath.”

Caught in the maelstrom of smoke and bullets Moffat saw an opportunity to launch a counterattack. He launched his torpedo between the waves and it managed to connect with the terrifying battleship.

“I saw the enormous bloody ship. I thought the Ark Royal was big, but this one, blimey. Then I heard him say ‘let it go’ and I pressed the button. He said ‘we’ve got a runner’ – and I got out of there.”

The attack from Moffat’s torpedo crippled the Bismark’s control system causing it to run in circles until it eventually capsized from supporting attacks. By taking down the Bismark, he saved countless lives and boosted Britain’s morale. For John Moffat this is not death, this is immortality.