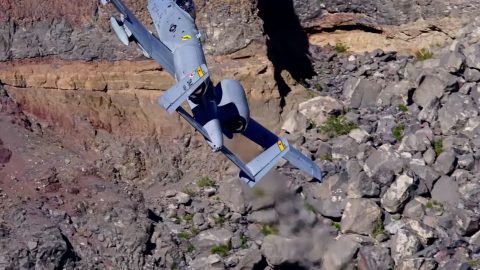 The A-10 Thunderbolt II, commonly referred to as “The Hog,” is one beastly aircraft. Built back in the 70s and still in service today, these planes were specifically designed for one thing and one thing only. To provide close air support (CAS). Since then, there hasn’t been an aircraft that comes close to performing that role on the same level, as its entire airframe is built around its gun; the GAU-8.

These birds are known for not only their gun but also their ability to fly low and slow and have a long loiter time. When our troops get in a jam, these pilots can come in straight at their target and obliterate everything in their path. With that, comes training.

The video we found below was taken by ManteganiPhotos, a YouTube channel with many well-shot aviation videos. Not too long ago, he captures a number of A-10s practicing low passes at Star Wars Canyon located in California. Hailed to be “American’s Plane Spotting Jewel,” this is where many pilots hone their low terrain piloting skills.

Having said that, right at the beginning of the video you see one pilot making a really low pass next to the canyon wall. Judging by the shadow (which seems to be almost the same size as the aircraft at one point), the pilot made one incredibly low pass. We’re sure he knew exactly what he was doing, but you’ve got to admit that looks really, really close.