JFK’s Survival Story in the Pacific During WWII Explained 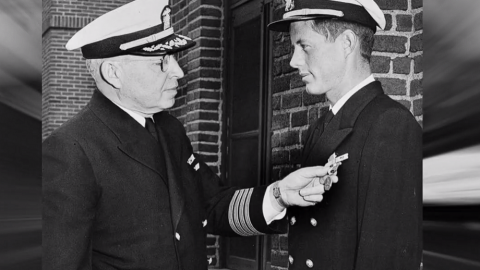 On April 24, 1943, Kennedy took command of PT-109, a patrol torpedo boat based on Tulagi Island in the Solomons. A week later, the PT-109 and 14 other boats were sent to stop the Japanese ships carrying supplies and 900 soldiers.

That evening, 24 torpedoes were fired by 8 American PTs, with none scoring a hit. After the barrage, Kennedy spotted a Japanese destroyer making its way back to base.

Intercepted By A Ship

Kennedy decided to pursue the ship and turned towards it. Suddenly, his PT-109 was rammed by Amagiri, another Japanese destroyer.

The boat was cut in half from the impact, killing two crew members. Kennedy and his men vowed not to surrender and decided to swim towards an island 3.5 miles away.

In the following days, Kennedy and some of his men swam for hours in search of food. It wasn’t until almost a week later when Lt. Liebenow rescued them on August 8, 1943.