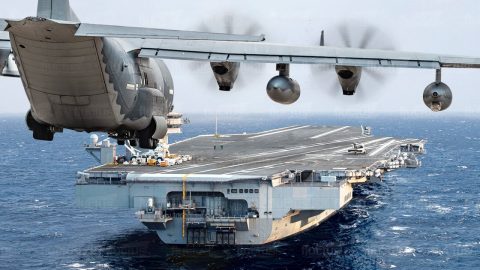 Who would have ever thought that a massive plane such as the C-130 Hercules could pull off a carrier landing?

The attempts to land on the USS Forrestal were made on October 30, 1963. Aboard the Hercules was pilot James Flatley, copilot Stovall, flight engineer Brennan, and Lockheed flight test pilot Ted Limmer.

Flatley and his crew made 29 touch-and-go landings, 21 unarrested full-stop landings, and 21 unassisted takeoffs. While carrying the max payload, the C-130 only used 460ft of runway for landings and 745ft for takeoffs.

Even though it was successful, the Navy felt that it was too risky for the C-130 to do it. Nevertheless, it proved that it was possible to carry 25,000lbs of cargo for 2,500 miles and still land on the carrier.

For his effort, the Navy awarded James Flatley a Distinguished Flying Cross.