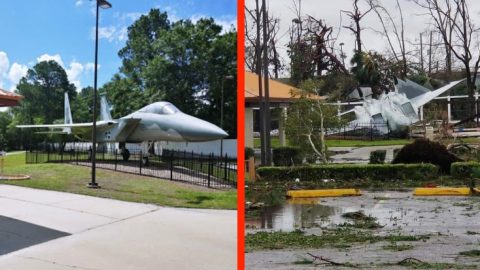 Prepare for the worst and hope for the best is the motto of many disciplined warriors throughout history. However, there is only so much that you can do when you are pitted against the forces of nature. Tyndall Air Force Base in Panama City, Florida found itself in the path of Hurricane Michael and things weren’t good.

Tyndall Air Force Base took a direct hit from Hurricane Michael and caused extensive damage throughout the facilities. Nearby at Veteran’s Park, a static display of an F-15 was flipped upside down by the powerful winds. Knowing the impending dangers of the hurricane the staff as well as F-22s, F-15s and F-35s were evacuated to Barksdale Air Force Base in Louisiana.

TYNDALL AIR FORCE BASE 0600 UPDATE – Base leaders do not yet have an estimate of when Tyndall AFB will reopen. Base…

Posted by Tyndall Air Force Base on Thursday, October 11, 2018

There have been no injuries reported, although many of the facilities are reporting damage. The evacuation order will stand until Hurricane Michael has cleared. This video clip from Tyndall Air Force Base shows the fighters evacuating before the hurricane makes landfall.