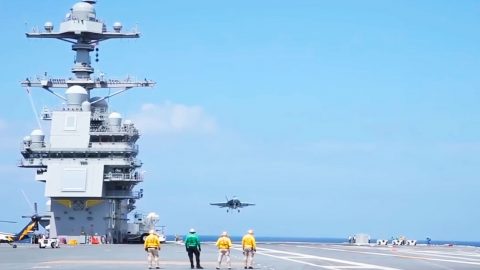 U.S. Navy’s newest carrier commenced with another part of its sea trials. The crew was testing launching and recovering an F/A-18 Super Hornet to assess the functionality of all the systems. The big one in question was the Electromagnetic Aircraft Launch System, or “EMALS”.

USS Gerald R. Ford was launched and christened in 2013 and has been commissioned in July of 2017. It is now being rigorously tested and if all goes well, she’ll be deployed sometime in 2020.

The utilization of the EMALS will help launch 25% more aircraft while using 25% less crew.

As part of her sea trials, the EMALS system has to be evaluated as part of thousands of other new gadgets onboard. What makes this so significant, however, is that it is the first carrier to implement this new technology.

Every other carrier before USS Gerald R. Ford had a standard steam catapult system that launched aircraft into the air. As the name suggests, EMALS uses a linear induction motor by creating an electromagnetic field. This not only launches aircraft in a much smoother manner but also eliminates the massive amount of space traditional steam catapults need.