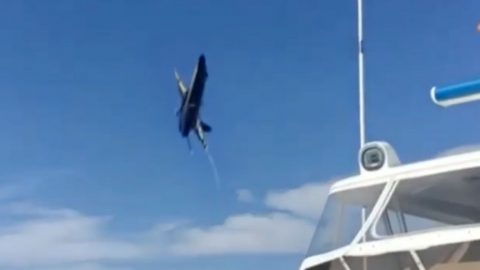 Although the airshows they put on are fantastic without a lack of a better word, the best place to watch them might not actually be at the airstrip. The video below will show you why.

A group of friends was watching Huntington Beach, California airshow from a boat in the harbor. There are regulations in place for the Blue Angels not to fly within a certain distance and speed over the crowds during the airshows, but once they perform their maneuvers the need to fly out and turn around. For the lucky folks on that (and other) boat, it happened right over them.

Probably flying close to Mach 1 to make it back in time, the Blue Angel performed a minimum radius turn right on top of them. He was low too which we can’t even imagine what that must have felt like but we can assume it rattled ribcages.

The guy’s face at the end says it all.