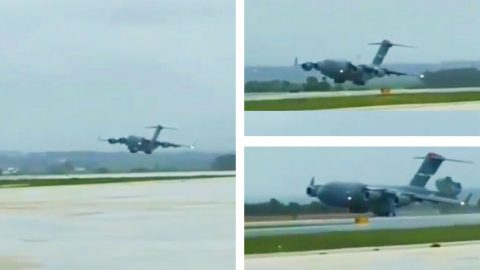 Out favorite Instagram profiles, comat_learjet, just uploaded a great new video showing a well-oiled crew coming in for a pretty sketchy landing. Facing some incredibly strong crosswinds, the giant C-17 Globemaster III came in crabbing and eventually straightened out as it was supposed to, but a gust of wind almost caused a wing scrape.

In aviation, there are a couple of different techniques for a crosswind landing. They are, de-crab, crab, sideslip, and forward slip. From the looks of it, this pilot opted for the “wing low” approach, something an Instagram commenter brought up.

Either way, although it looked a bit shaky at first, the C-17 made solid contact and logged in another successful landing. Good job folks!