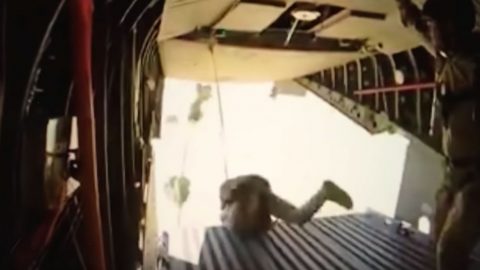 The operation is “designed to foster regional cooperation to enable our African partners to stabilize regions of North and West Africa while reducing sanctuary and support for violent extremist organizations, ” according to the United States Africa Command.

One such exercise is static line jumping for quick insertion. As any paratrooper of any nation will tell you, their job is considered one of the most hazardous as many things can go wrong during a jump. From a snagged static line, failed deployment to simply landing wrong with heavy packs and breaking your leg, this is one dangerous exercise.

Following protocol and form are so important then as you can imagine. Here’s what this exercise should look like:

A viral video from earlier this week showed what was going on during one of these exercises and don’t resemble anything you’ve seen above.  No unit so far has fessed up to it being their work, but aside from one jumper, every single person on that team made a grievous mistake.

From downright faceplanting before exiting the ramp to sitting down on the age like a scared child entering a pool, the mistakes just keep on coming. Check out the footage below.