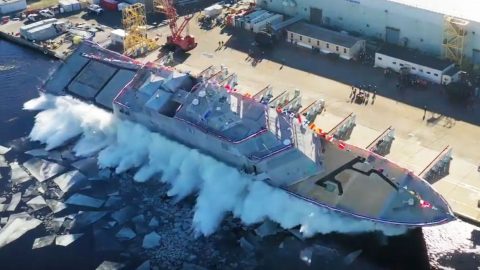 On December 15th, 2018, the United States Navy christened and launched one of their newest ships into the Menominee River in Wisconsin. USS St. Louis, as it was named, will be a Freedom-variant Littoral Combat Ship that will be added to the Pacific Fleet.

As a littoral ship, the job of the USS St. Louis will be to conduct missions near the shoreline of the United States. Its relatively small and nimble design allows it to move quickly to where ever they’re needed with the Navy envisioning them to be “a networked, agile, stealthy surface combatant capable of defeating anti-access and asymmetric threats in the littorals.”

The Secretary of the Navy Gordon R. England told the DoD in the early 2000s the navy will need these small, maneuverable and highly adaptable vessels so they can perform a number of roles. Their modular design makes them able to fit different roles such as  “anti-submarine warfare, mine countermeasures, anti-surface warfare, intelligence, surveillance and reconnaissance, homeland defense, maritime intercept, special operations, and logistics.”

As of this writing, the United States has ordered 15 of these littoral ships, laid down 12, launched 9 and commissioned and has in active service 6.  USS St. Louis will be the 7th ship to be in service when it finishes sea trials which can take up to a few years.

During this time, the Navy will be testing the vessel’s seaworthiness which includes speed trails, endurance, maneuvering, and onboard systems.