Plane Hit By Train After Crash Landing On Railroad Tracks 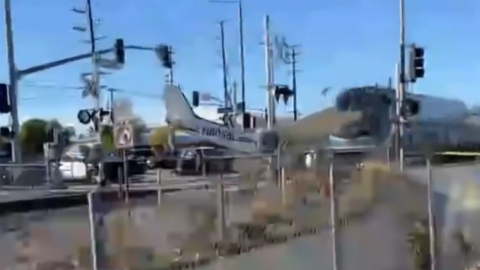 Sunday — A plane made an emergency landing on the railroad tracks at the intersection of San Fernando Rd. and Osborne St. after taking off from the Whiteman Airport around 2:10 p.m.

Foothill Division Officers and bystanders worked together to quickly dragged a bleeding pilot out of a Cessna 172 just moments before an oncoming train collided at full speed with the aircraft. He was the only person inside the plane and was safely transported to a hospital. No one on the ground or on the train was reported injured.

At 3 p.m., the plane remained on the tracks of Metrolink causing all train traffic through the area. Portions of the wrecked plane and damaged railway crossing signs were scattered on the ground around the crash site. A small amount of fuel that leaked out of it was contained by Los Angeles fire department, they stated that,

“The plane failed after takeoff from Whitman airport, and it landed on the train tracks, police arrived swiftly because there is a police station right next to the accident.”

According to Federal Aviation Administration officials, the aircraft is owned by a Santa Clarita resident and its registration is valid through May 2025. The cause of the emergency landing was under investigation by the FAA and the National Transportation Safety Board.