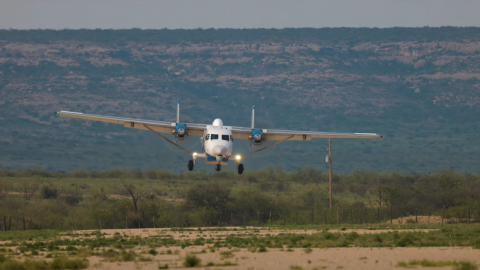 The MC-145B Coyote is a multi-role strike aircraft developed by Sierra Nevada Corporation and PZL. Both companies partnered up to produce the Coyote for the US Special Operation Command’s Armed Overwatch program.

The military is expected to receive 75 MC-145Bs to perform CAS, armed intelligence and ISR, and precision strike missions. That’s not all – the Coyote can also perform casevac/medevac, airdrop, paratrooper deployment, and tactical airlift missions if required.

These highly-modified aircraft have eight reloadable common launch tubes in their cargo bay, where they can launch precision-guided munitions and UAVs. MC-145Bs can also shoot APKWS, Hellfires, and SDBs.

Most impressively, the Coyote is one of the few planes that can fire a JASSM out of the cargo bay.

The aircraft is powered by two Pratt & Whitney PT6A-65B turboprop engines with a rated output of 1,100shp each. Meanwhile, its rugged fuselage and landing gear allow the Coyote to land on austere locations and have a landing and take-off distance of less than 1,000ft.