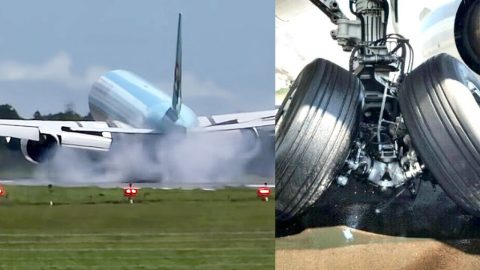 ‘Tis but a scratch

A Korean Air Boeing 777-300 was descending on Narita Airport when its aft right main landing gear suddenly ruptured during touchdown. However, the aircraft still had a relatively normal landing before it was forced to stop due to the damage.

Both the pilot and the crew remarked that no hard landing occurred at the airport. Regardless, the runway was closed for half an hour to clear the debris while the passengers disembarked an hour and a half later.

According to the JTSB, it is highly probable that the fractured axle was from the stress corrosion cracking brought on by the corrosion generated on the pivot bore. Moreover, the water penetration caused by the torn fillet seal might have helped develop more decay on the bore.