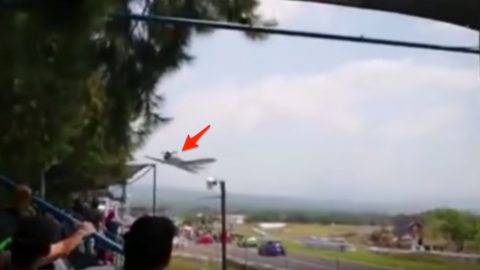 Disaster struck at the opening day of the National Motor Sports Championship in Escuintla, Guatemala on March 3, 2019 when pilot Rodrigo Ibarguen collided with a tree. Ibarguen was admitted to a private city center where he later died. His passenger and copilot, Pablo Guillen, passed away in the hospital after being transferred by helicopter.

As tragic as this news is, it could have been much worse. The North American T-28 Trojan narrowly missed the audience from the looks of it. The footage shows the plane looping low above them, a maneuver that is illegal in the United States for obvious safety reasons. Attempting to gain altitude, Ibarguen got caught in the trees, stunning everyone.

Not His First Accident

Ibarguen was a Guatemalan aerial acrobatics pilot and founder of the G4 Team Aviation Team. 55 years old with an infectiously happy personality, the experienced pilot had previously had his Guatemalan license suspended by the Aeronautica Civil. As it turns out, he had already had two accidents, one in 2015 and one in 2017. He did, however, have an authorization from the Federal Aviation Administration.

The aftermath was nasty. Emergency personnel arrived to a severely shredded plane. Mangled parts blocked the road and a small brush fire had to be put out. It’s unfortunate that Ibarguen won’t get another opportunity to learn from his mistakes, but the mishap serves as a somber reminder of the importance of safety to pilots everywhere. Rest in peace, Rodrigo Ibarguen and Pablo Guillen.

See the accident in the video captured below.