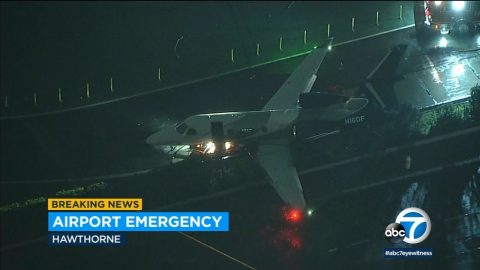 An Embraer EMB-505 Phenom 300 skidded off the runway, near Prairie Avenue. The aircraft originally took off from Jackson Hole, Wyoming, before landing at Hawthorne Municipal Airport.

While landing, the private plane drifted all the way to the runway’s end before sliding off and hitting its tail on a perimeter fence. Thankfully, all seven passengers onboard were uninjured and able to evacuate the plane after the crash.

However, the aircraft’s tail and wing did stretch out onto the streets, which shut it down for hours.

There are still no reports as to what actually caused the crash. However, those close enough to the scene attributed the incident to the wet tarmac.

Whatever it is, they’re lucky nobody got injured – that almost took a turn for the worse!