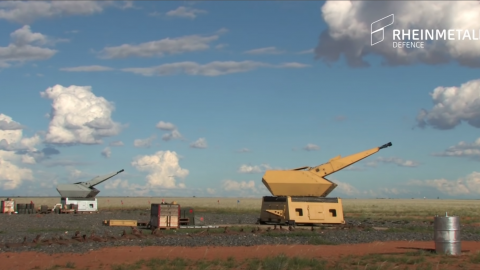 This programmable ammunition uses magnetic coil induction to program each round with a time to fly based on the muzzle velocity, and the target’s calculated future distance.

A small charge then ejects 152 small tungsten sub-projectiles, which populate the area around the point of impact, creating a deadly cloud. Though it only weighs 3.3 grams each, the accumulation of these projectiles can effectively damage control surfaces, causing the target to crash.

Moreover, the gun has an effective firing range of up to 5,500 yards and a maximum rate of fire of 1,000 rpm thanks to its efficient linkless feed system.

It is also controlled by radar or electro-optical trackers and can engage anything between anti-ship missiles, drones, and surface vessels.