Why The US Navy Held a Funeral for a Kamikaze Pilot 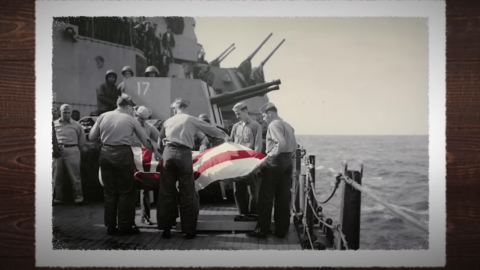 As the tide of war shifted in favor of the Allied forces, Japan opted to bring out the “ace up their sleeves” – the Kamikaze. These suicide attacks were based on Japan’s cultural values of loyalty to the country, honoring the families, and devotion to the Emperor.

More often than not, these Kamikaze pilots were young and inexperienced – yet unabashedly loyal to the cause. Amongst these young men was Setsuo Ishino, a 19-year-old pilot.

On April 11, 1945, Ishino took off from Kanoya Air Base with his A6M Zero and a 500-kg bomb. He aimed toward USS Missouri and struck the armored side of the ship. Luckily, the 500-lb bomb didn’t explode and only fell into the sea.

USS Missouri’s captain, William Callaghan, set out an order to give Setsuo Ishino a military burial at sea. According to him, he was still a fellow soldier and should be treated as such – regardless of which side he fought for.

The burial started at 9 AM and was concluded by firing three volleys, a hand salute, and encasing the coffin with a Japanese flag the crew made overnight.

Do you think this was a good decision?