Ship Gets Taken Out By Torpedoes and Rockets 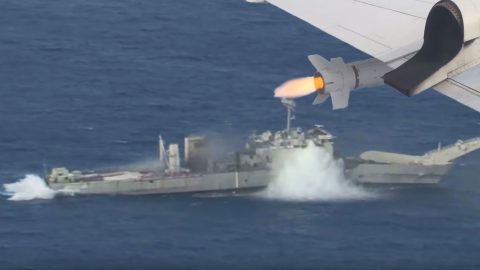 It’s not every day you get to see a ship torn to shreds by some of the most advanced weaponry out there. During RIMPAC (Rim of the Pacific Exercise), however, this is something that happens quite a bit.

This exercise is “the world’s largest international maritime warfare exercise.” Its purpose is to promote cooperativity between all allied nations in the Pacific to maximize effectiveness in case of a global war.

This vessel is a Newport Class Landing Ship, Tank, (LST). It was launched in 1970 as a supply ship for assault amphibious vehicles and other equipment to war zones. She was deployed to Vietnam several times.

In 1993, USS Racine was decommissioned and after two and a half decades, finally made her way to RIMPAC as a target vessel. On July 12th, 2018, she was sunk by a Harpoon missile from an aircraft and a torpedo from a submarine.