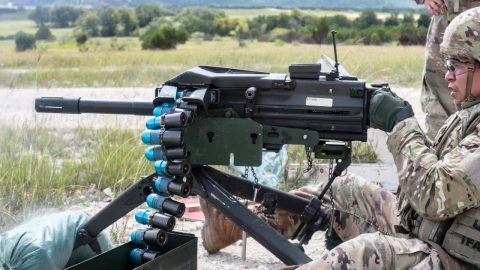 US Army soldiers conducted a live-fire exercise at Grafenwoehr Training Area, Germany, in 2022. The “Sky Soldiers” of the 173rd Airborne Brigade fired their Mk 19 grenade launchers and M240 medium machine guns to hone their skills for battle.

Mk 19s are American belt-fed automatic grenade launchers developed during the Vietnam War. Their 40mm rounds are fired at sustained rates of 40 rpm or at a cyclic rate of 325 to 375 rpm. Its primary ammunition of an M430 grenade can kill anyone within a 5m radius and wound anyone within 15m.

M240s have been in service since 1997 and were first used in the Gulf War. The FN MAG chambers the 7.62x51mm NATO rounds and can be fired at 650 to 950 rpm. The Army uses the M192 lightweight ground mount as tripods to stabilize the gun and make adjustments.