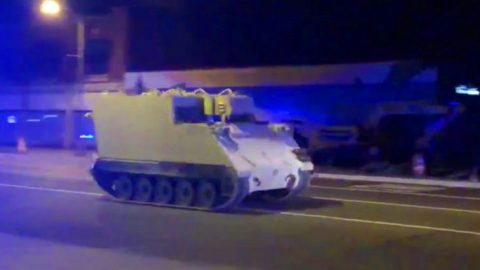 Richmond, Virginia is a lovely town with a rich history and not too much going on. So you can imagine how the people of Richmond felt when they suddenly saw a tank flying down the road being chased by police cars.

“Driving down Broad Street in Richmond. At least 30 police vehicles pursuing/escorting a tank.”

The whole situation began when a soldier stationed at Fort Pickett in Blackstone, Virginia stole the armored vehicle and took it on a joyride. The man behind the wheel was identified as Joshua Philip Yabut who was on base conducting a routine training exercise when he hijacked the vehicle.

The M577 armored personnel carrier stolen from the national guard reached speeds of about 40 miles per hour while leading police on the case. The vehicle was not equipped with any weaponry and there were no crashes or injuries reported after the incident. After nearly two hours of pursuit, the M577 came to a halt and Joshua Philip Yabut was arrested and taken into police custody.

“It just seemed like something out of a movie. I heard a large vehicle, it sounded like a tank, but it was moving pretty fast.”

This clip has collected footage from several witnesses and assembled them together.