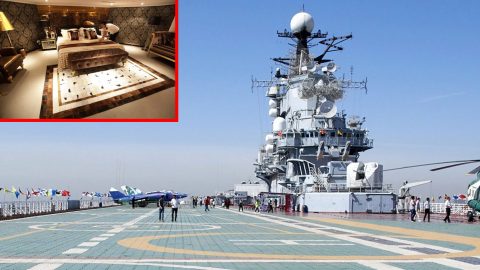 Ships get decommissioned all the time and many of them are simply cleaned out and sunk. Some historically significant vessels are spared that fate and are converted to museums, but if a city can’t afford to store it, off to the scrapyard they go.

There is one other alternative, however, that we didn’t even know existed. In China, an old Russian aircraft carrier was converted to a theme park and then a luxury hotel.

Located on the coast of northern China, Tianjin is its fourth largest city with a population exceeding 15 million. It is a popular tourists attraction as the architecture varies between colonial, modern and French as the city went through many stages since it was formed in 1404.

Because of its location, the aircraft carrier Kiev was stationed at one of its harbors. It’s been there since 1996 when Leisure Quest International pitched the idea to the city in hopes of attracting more tourists.

Kiev is a Soviet-built “heavy aircraft carrying cruiser” built in the 1970s. For the first few years of service, the ship sailed the Black and Mediterranean Seas performing routine exercises and serving as a testbed for the Yakovlev Yak-36M.

After the fall of the Soviet Union, she was kept by Russia until 1993 and was then decommissioned due to lack of funds. Three years later she was bought by Binhai Aircraft Park and turned into a hotel/theme park which you can see below.