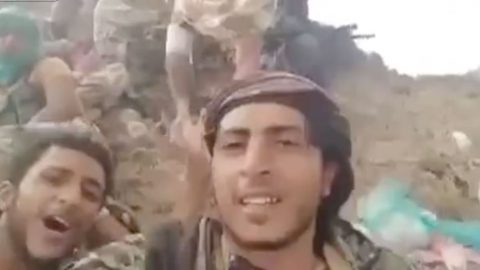 We’ve seen these types of videos a million times online. Some terrorists from whatever sect that divided into subsects 1000 times take a video of some sort of “victory.” They’re typically yelling their mumbo-jumbo while waving a makeshift flag, smiling at the camera as they do it.

Such is the case in this video but with a pleasant twist.

While seemingly behind cover at the top of a hill, two lads join in front of the camera with wide smiles on their faces to record a 1990’s quality video in 2018. While doing so, they point to the top of the hill as if celebrating some sort of achievement but are met with some heavy machinegun fire.

The rest of the video is everyone scrambling about with no rhyme or reason. As always, these guys are not trained to do anything that’ll save their own skin and although the video cuts out, we all know what the outcome of this probably was.