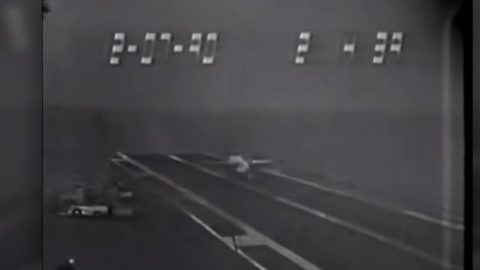 A T-2 Buckeye shattered its nose strut during its attempted carrier landing was caught on tape. The incident happened at USS John C. Stennis on December 7 1990. You can watch the original footage below.

Everything really happened fast when you’re a naval aviator. Luckily no one got hurt as the landing safety officer made an immediate “Leave your gear down” call as the aircraft landed so hard, it broke the camera.

In 1956, the U.S. Navy awarded a contract to North American Aviation to design and build a new jet trainer aircraft and in November 1959, the T-2 Buckeye was introduced as the intermediate training aircraft of the U.S. Navy, U.S. Marine Corps student naval aviators and student naval flight officers to jets.

The Buckeye had a strong, wide-based tricycle landing gear, powered controls, large trailing-edge flaps, among other things. It is a tandem-seat, carrier-capable and all-purpose jet trainer that proved to be reliable for the student pilots.