Testing The Helicopter With Its Own Parachute 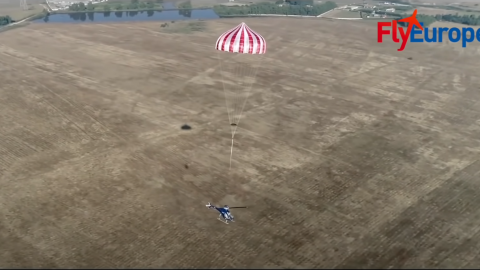 A Heli With A Chute

A trusty ejection seat for rotary-wing aircraft can be quite hard to design. In fact, only two helicopters made by Kamov carry ejector seats. Their Ka-50 and Ka-52 attack helicopters have explosive bolts that can release the rotor blades before the ejection seats could activate.

In comparison, Curti Aerospace decided to test the feasibility of a helicopter with a ballistic parachute by designing the Curti Zefhir. In September 2018, the Zefhir did just that.

The aircraft made use of Oristano-Fenosu airport to demonstrate the capabilities of the world’s first exclusive parachute system for helicopters.
Its parachute was installed in a non-rotating box above the main rotor and was deployed after the engine was turned off to simulate a failure. Surprisingly, the helicopter’s descent stabilized at less than 7.5 m/s – well within the crash test requirements.