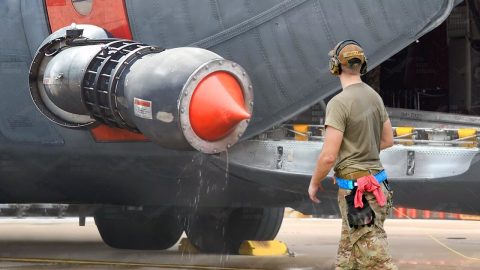 C-130 Hercules and C-390 Millenium are both the primary users of the self-contained unit used for aerial firefighting.

MAFFS are composed of five pressurized fire retardant tanks capable of holding 2,700 gallons. Each module also has a pressure tank with compressed air stored at 1,200 psi.

MAFFS can deliver Corexit and AFFF Foam for chemical or oil spills. Nuclear, Radiological, and Biological contamination can be controlled through the delivery of atomized isotopes. Its industrial use also extends to fumigation and crop dusting.

One “drawback” of MAFFS is its long waiting time. Since C-130s have to be pulled back from their standard military missions, the lead time can vary considerably. However, the tanks used for MAFFS are quickly filled for only 10 minutes.

The airborne firefighting system has also been used internationally. Air Forces from Columbia, Brazil, Morocco, and Thailand are currently using the system today.