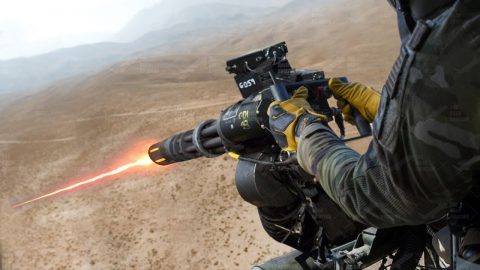 This six-barrel rotary machine gun comes pre-installed in Bell Kiowas, Cobras, Iruqiouis, and many more. The “minigun” uses 7.62x51mm NATO rifle cartridges with a rate of fire between 2,000 to 6,000 rpm.

Punching Above Its Weight

M134s are relatively lightweight. These miniguns only weigh 85lbs, but this can be further reduced to 41lbs if modified. For comparison, the M61 Vulcan weighs more than 200lbs while the GAU-8 is thrice that.

The US Army, Air Force, and Navy all make use of this light but deadly minigun. The Navy’s and Air Force’s versions are called GAU-2/A (fixed) and GAU-17/A (flexible).

Designers from General Electric wanted to develop a more reliable weapon than the M61 Vulcan. The result is the M134 minigun that is capable of firing 6,000rpm without overheating.

The XM214 Microgun was the smaller version of the M134. It was planned to be a 5.56mm-cal machine gun but sadly never entered mass production.