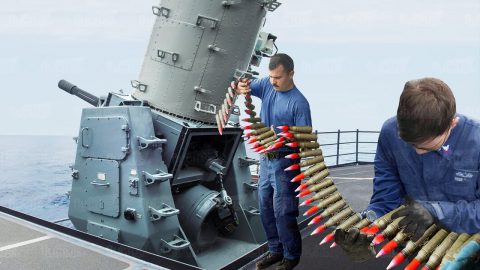 The Phalanx and RIM

Modern drones can attack, defend, scout, and perform other missions with minimal human intervention. This new threat has forced militaries worldwide to find ways to protect themselves from this technology.

One example of this is the Phalanx CIWS. The system’s main armament is a 20mm M61 Vulcan Gatling cannon mounted on a swiveling base. The 20mm gun can fire between 3,000 to 4,500 rounds/min at a maximum range of 6,000 yds. It can easily detect and counter rockets, artillery, mortar, and drone attacks using its sophisticated tracking and computer systems.

Another great example is the RIM-116 Rolling Airframe Missile. The lightweight surface-to-air missile is paired with a Mk 49 Guided Missile Launching System to protect against various threats. It has an operational range of up to 6.2 mi and can launch rockets at Mach 2 speeds with over 95% accuracy.