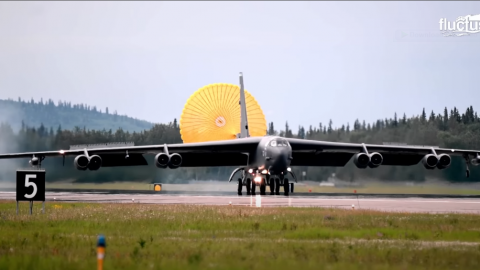 Starting the B-52 Stratofortress usually takes about an hour. However, landing this gigantic bomber is an entirely different ballpark. With a wingspan of 185ft and a maximum takeoff weight of 488,000 lbs, you can imagine how hard it is to decelerate the aircraft.

In some instances, the B-52 crew might deploy a drogue parachute to help the aircraft decelerate and come to a stop. Drogues are particularly useful for landings on wet or icy runways.

Unlike ordinary parachutes, drogues are more elongated and have a lesser surface area to generate less drag, enabling them to be deployed at higher speeds.

B-52s aren’t the only aircraft that use drogues either. During tricky landings, fighter jets such as the F4 Phantom and Eurofighter Typhoon can also utilize these parachutes.