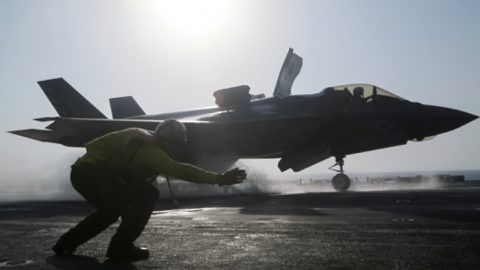 The Lockheed-Martin F-35 Lightning II has been a source of huge controversy during the course of its development. The Fifth-Generation fighter has become the most expensive weapon system in history and attracted many who are critical of the program. But love it or hate it, the F-35 just conducted its first combat mission.

Recently, the critics have added fire to the flames after an F-35 crashed Marine Corps Air Station Beaufort in South Carolina. Fortunately, the pilot ejected safely and there were no loses aside from the fighter. Despite that incident, the show must go on as the US Marine Corps launched the F-35B’s first combat mission from the USS Essex.

“The strike occurred in the U.S. Central Command area of responsibility in support of Operation Freedom’s Sentinel in Afghanistan. During this mission, the F-35B conducted an air strike in support of ground clearance operations, and the strike was deemed successful by the ground force commander.”

The F-35B’s airstrike over Afghanistan against a Taliban unit was met with success. It seems the F-35 is here to stay despite the opposition to the fighter. Footage from the first combat launch aboard the USS Essex can be seen here.