This New Russian Rifle Drone Is A Real Thing 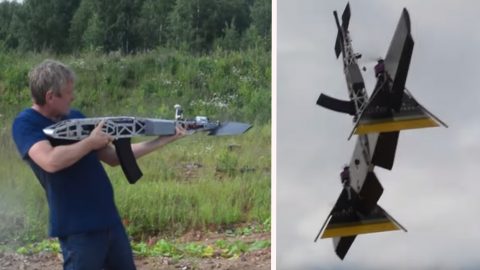 If we’re honest, it’s not like none of us have ever thought about combining a rifle with a drone to make the ultimate flying gun. Still, no one has made one quite like this.

It’s a Kalashnikov rifle with wings, basically a “fully functioning gun inside a set of wings.” The 50 lb. gun is capable of shooting and flying at the same time. Supposedly, it can stay in the air for 40 minutes at a time.

The bizarre looking  was designed by Moscow Aviation Institute and the state-owned Almaz Antey defense company has already filed for a patent.

The autoloading Kalashnikov is equipped with a 10-round, box-type magazine and is capable of tracking a target if it misses the first time around. Though a bit awkward to handle, it can also be picked up and fired like a regular Kalashnikov rifle.

In response people have been calling it things like a “crazy looking distraction” and a “terrifying vision of the future of warfare.” It could potentially be both of those things, but the innovation is pretty neat!

Kalashnikov also has an ominously dubbed “suicide drone” in the works as well as a  pretty fun looking “flying car.”

We live in some scary yet exciting times, don’t we?

Check it out in the video below.