The USN Just Leaked Their New “Hydrofoil” Vessel By Accident (But Is That True?) 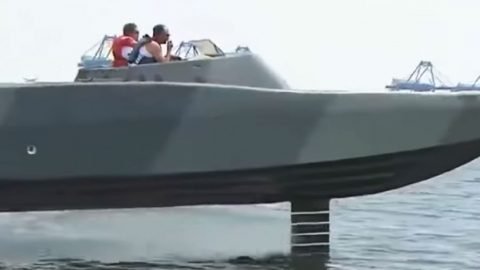 The United States Navy is making headlines mid-April with the Tweet below making it onto every news media outlet. Initially posted on April 8th, 2019, a GIF from on a random Twitter feed of @lfx160219, a seemingly Asian page of sorts, has reached up to Popular Mechanics calling it “leaked” footage of a ship from the  Naval Surface Warfare Center, Carderock Division.

Uhm, not really leaked nor recent though.

After doing some digging, we figured this video was caught in San Diego (our home base) so that seemed true. Having driven on the Coronado Bridge and taken a stroll through seaport village, however, it seems like the Navy would not be ripping through the harbor where everyone could see it.

We remembered the Navy’s recent image rebranding with the slogan “Forged by the Sea,” and wait, did they show us a glimpse of this boat in the commercial? Yes, yes they did. You can see the full video below.

The idea, however, is also not even new. The United States Navy built 6 of these types of ships in the 70s and 80s calling them the Pegasus-class hydrofoils. Designed for coastal patrol, the hydrofoil design made them fast but in the end, they were simply not cost-effective for their designated duties and were scrapped.

As the old adage goes, “What goes around comes around.”