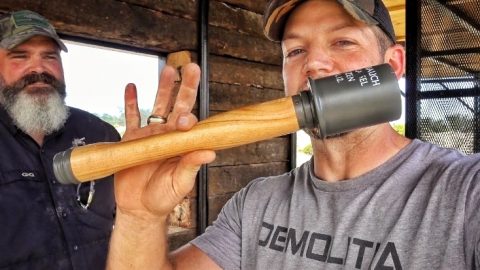 During WWII, the Wehrmacht used a variety of weaponry during their conquest of Europe. However, there is one that stands out in popular culture, the Stielhandgranate or German stick grenade. It has an unusual appearance, but there is a reason for that.

First introduced during WWI, the “potato masher” gained a reputation among against British troops for its effectiveness in close quarters. The power of the stick grenade is not just from the explosion, but also the shrapnel it also produces. This detonation hurls small sharp pieces of metal and chunks of the wooden handle within a range of about 15 feet.

There are many people who question the design of the Stielhandgranate as opposed to traditional hand grenades. The advantage the stick grenade over hand grenades is that the stick adds range and accuracy. The handle acts as a lever, controlling momentum to reach the desired target, often times twice the distance of a normal grenade.

“The Model43 could be thrown approximately 30 to 40 yards, whereas the British Mills bomb could only be thrown about 15 yards. The design also minimized the risk of the grenade rolling downhill back towards the thrower when used in hilly terrain or in urban areas.”

This video from Demolition Ranch shows just how to use them in a combat setting.