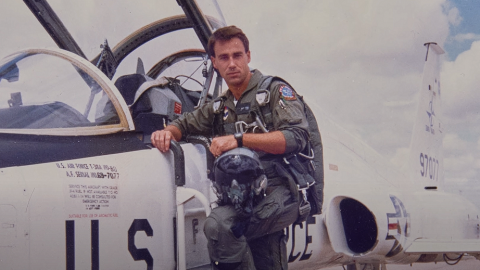 On April 18, 1995, 2 pairs of aircraft would try to intercept each other at night. The 4 planes took off from Seymour Johnson Air Force Base and flew 150 miles offshore. There are about 100 miles of separation between the two pairs at that point.

Trust Your Instruments, Listen To The Plane

Udell’s wingman was 3 ft off his wing. This was done to make it look like one contact on the “enemy’s” radar. As the two got close to the enemy, his wingman went left and he turned right. About 100 degrees through the turn, Udell hears the plane getting faster and faster as the wind rushes over his canopy.

He brings up his attitude direction indicator to check if the information on the HUD was consistent. The heads-up display showed the plane turning at a 60-degree bank but the ADI pointed straight at the water below him.

His arm was dislocated, his foot was bent out of shape, and the other snapped and was bleeding profusely. It took 4 hours for rescue to come and pull him out. Dennis, his wingman, died instantly. Meanwhile, Udell was told he was never flying or walking ever again.

After a few months of physical therapy, Udell flew once more on February 1996.