U.S. Navy Has a Nuclear Submarine That Can Destroy A Country in Minutes 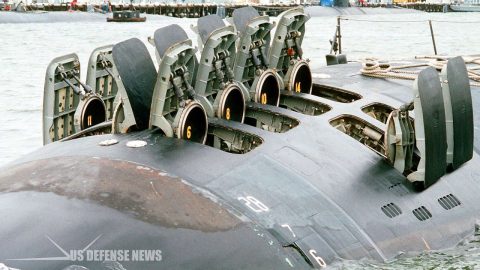 Ohio-class submarines entered service in 1981 as a replacement for five submarine classes known as “41 for Freedom”. It subsequently became the largest submarine to serve in the Navy and the third-largest class ever built.

The whole Ohio-class fleet carries about half of America’s nuclear arsenal on board. Each vessel carries 24 Trident II SLBMs, which can be launched underwater and reach 7,500 miles away.

Even though SLBMs aren’t pre-targeted, they can be quickly assigned coordinates from the US Strategic Command via very low-frequency systems.

A Horrific Sight For Everyone

If a Trident re-enters the atmosphere at speeds of up to Mach 24, it splits into eight independent re-entry vehicles – each having a 90, 100, or 475 kt warhead.

Its nuclear reactor gives the Ohio class virtually unlimited underwater endurance. In addition, this enables the submarine to maintain a cruise speed of 20 knots while producing very little noise.